If you ever wanted to quantify the strength of a trend based on its volume levels – as well as the degree of buying and selling pressure – there’s a handy indicator that can help you do the job.

The Chaikin Money Flow (CMF) is an indicator, created by Marc Chaikin, that’s used to analyze Money Flow Volume over a specific “lookback” period of time, usually 20 or 21 days.

The concept of Money Flow Volume (MVF) is a variable used in the calculations by Chaikin and measures the buying and selling pressure of an asset over a single period. In order to calculate money flow, one must first determine the Money Flow Multiplier used in the overall equation.

To calculate the Money Flow Multiplier for a period:

Money Flow is defined by multiplying the Multiplier with the volume for the current period:

Thankfully, you don’t need to do the equation every single time, as charting websites like TradingView can do it for you.

What to watch for

The chart above shows that from period Jan. 6 to Jan 9. 2019, prices began to retrace after a slight rally occurred the day prior.

But with a triggered sell-off along the $4,000 former support zone, the CMF illustrated a huge pickup in selling pressure and confirming the bearish move as legitimate and extensive.

Indeed, savvy investors could have used the CMF to gauge the swift rejection at the neutral zero-line, conserving 9-10 percent of their investment in the process.

A bull or bear cross with the CMF simply means a crossover above or below the neutral zero-line when the indicator begins to move and switch from one zone to the other.

Recent price action shows a dip below 0 as it crossed into negative territory amid a minor sell-off, indicating that selling pressure is greater for that current period and the possibility for dipping lower is increased.

However, the CMF isn’t always perfect and only posts information after a major move has occurred, allowing one to simply confirm its placement in terms of momentum and volatility.

The CMF is best used in conjunction with other indicators like the relative strength index (RSI), stochastic or Chaikin oscillator in order to provide confirmation to your primary reading.

And while it is useful on all time frames, the CMF functions optimally in analyzing longer-term trends. 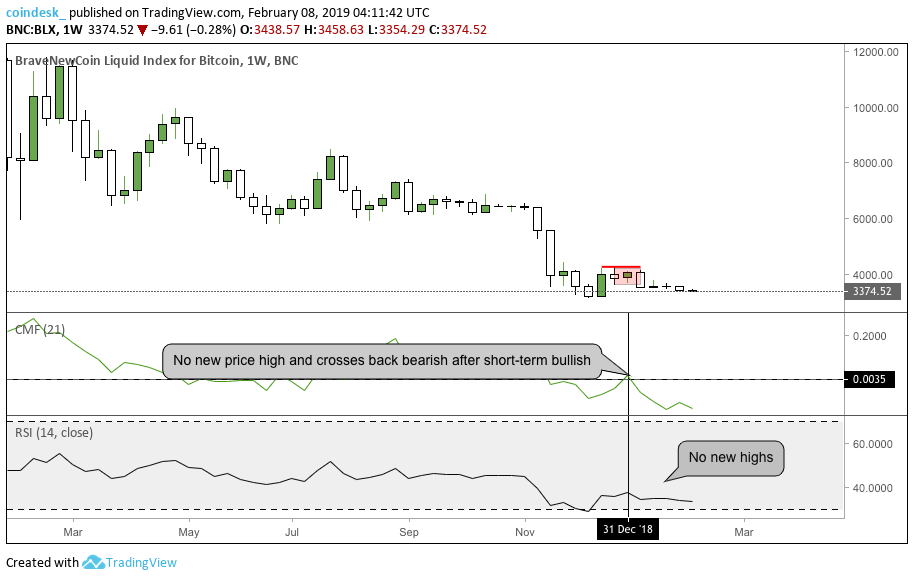 Here we see the RSI providing a fairly lackluster reading on Dec. 31 of 31.54 combined with the bearish cross on the CMF as price made no new highs after temporarily attempting to rally higher.

Once the CMF reaches the bottom of the range, selling pressure is at its greatest extent and if no further drawdown is achieved then you may consider prices to be stabilizing at those current levels.

But there are limitations…

The Chaikin Money Flow faces limitation in the aforementioned Money Flow Multiplier as it does not take into account the change in a trading range between periods, meaning any price gaps on the chart won’t be picked up and will fall out of sync until an eventual reset or a reconfiguration of the values.

When combined with other indicators, however, the Chaikin Money Flow can be a useful tool for measuring the buying and selling pressure of a particular asset over a specified timeframe and could save you potential losses in the future when used in conjunction with other noteworthy signals.

Disclosure: The author holds no cryptocurrency at the time of writing.